Top to Bottom or Bottom to Top? 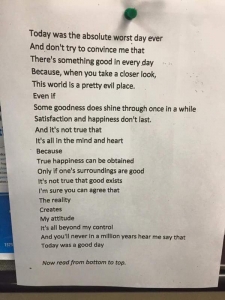 Eleventh grade student Chanie Gorkin may soon experience her best day ever with her poem “Worst Day Ever?” which, in the past 24 hours, has just gone viral on social media. In England, the poem was posted on a bulletin board in a bar where it was photographed and then posted online. Many viewers felt compelled to “share” this inspirational verse, soon producing a domino effect. Although the poem was posted on several sites with no credit to the author, a UK reporter finally traced its authenticity back to Poetry Nation, where Chanie is a member and has her poem and bio posted. “Worst Day Ever?” was a semi-finalist in the July to December 2014 contest and was published by Poetry Nation’s sister company (Eber & Wein Publishing) in the collection Beyond the Sea: Odyssey.

The bulletin board posting, however, was not the only catalyst responsible for propelling this clever verse in front of a worldwide audience. “Shocked” was one of the first words out of Dena Gorkin’s mouth during her phone conversation with Poetry Nation president Rachel Eber. Little did she know that sharing her daughter’s poem with a few friends on Facebook would lead to this. “We are just regular, ordinary, quiet people,” said Dena, who unabashedly admits her very limited use of Facebook, as is evidenced by her “five-and-a-half friends.” Who would have guessed these few friends and their eagerness to share this poem would engender the poem’s social media fame and the millions of views it’s receiving every hour?

Music and poetry oftentimes go hand in hand, and Chanie has an appreciation and talent for both. She enjoys the works of Shel Silverstein and other poets “whose styles include humor and clever twists.” And, ironically, this story has a humorous twist of its own, and one that Chanie would certainly appreciate—that is if she actually knew about the whirlwind of fame her poem is currently receiving. Yes, that’s right, she has no idea! With a chuckle, her mom explains to Eber that Chanie is away for the summer with no computer or internet. Her reaction, however, will most likely be low-key and modest, as she is not a fan of being in the limelight. She even requested that her mother not use her name with the poem when posting on Facebook. All shock aside, Dena is “glad that it’s having a positive effect on people.”

Seeking out the positive in everything is a Chassidic belief by which Chanie and her family live. This Jewish family dwells in the Chassidic Community of Crown Heights, Brooklyn, where Chanie attends an all-girls high school. She is the fifth child of six and, according to mom, is not the only sibling with an affinity for writing. Chassidic philosophy stresses that the mind rules over the heart. God is good, and since He is the cause of everything, everything is essentially good. Looking for the good in all things creates positive energy and a good reality. This philosophy is an ever-present source of inspiration for Chanie and is the message hidden in “Worst Day Ever?” Like she says, “It all depends on how you look at it.”

Category: Member Recognition
This entry was posted on Saturday, August 1st, 2015 at 12:00 am. Both comments and pings are currently closed.