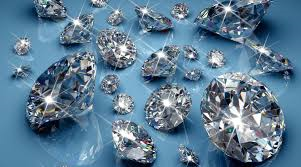 As a diamond is formed when subjected to intense pressure

it symbolizes affluence and affection,

it is the toughest mineral on earth,

to relate a similar metamorphosis in human form

Let us take a walk in the steps of this Treasure

She craved for a mum, a dad

maybe a modicum of happiness

the lines appeared to be disconnected

for she prayed and was deemed odd.

Though she was never tearful nor succumbed to self pity

Hoping to get a family of her own

believing in the very essences of true love

it was a disaster with an overbearing mum

the unaccommodating family: pious and cruel

her marriage soon broke, suffocating the hopes of a family

to start anew with three spoons, three cups, plates and a blanket

she worked three jobs, 7 days a week only to reach home by 8

as slumber overcame them, a glass of water she consumed

to quell her hunger and resume her night job

Overlooked at work for many opportunities

due to the color of her skin or being female

No one extended her the courtesy nor latitude

unless some gratitude in amorous desires were met first

she appeased not their desires and quenched her thirst

When she let her guard down and trusted another

hoping to provide a father for her two

two became three to feed and he left

her cravings of a happy home turned

Under intense pressure, the toughest soul was forged

and raise them she did, entirely on her own

raise them to love and respect

raise them in a happy home

raise them to be affluent and

she never failed to praise them

kind, full of love and with jubilation in her heart

as she had attained her cravings

through tears, sweat, prayer and pleas

only to bleed from abject disappointment

Was this her atonement that turned to success?

Being a single parent...what it takes to do the right thing