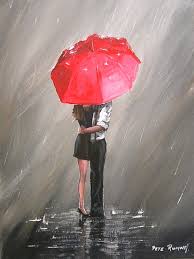 He waited in the rain
the Guy who was interviewed first
for the same job I did, at eighteen
not to rob him of his chances
he was perfection personified-
a beautiful smile he wore,
blonde hair, blue eyes that would
envelope and warm you from the downpour

If only we didn’t have the Group Areas Act
the enforced segregation of the races,
I would pace to him with arms outstretched
In his defense, he never saw me as color,
as he stood defiant and waited with valor

My interview done, poker face, sizing up
the other and grinning uncontrollably
Me, wondering if he would get the job
and him, gazing at my blue suit and wet curvature
his current preoccupation was out the rain and
under his umbrella, small enough for one,
as an overture he extends, to share.

If either of us were unsuccessful, what then?
In the army he would have to enlist
a requiem quickly I say in earnest,
that the army rejects his tryst
that being a fool’s errand as
I clearly see him a decorated
Captain with several Purple Hearts
the first awarded: for saving my wet parts

Our day concluded in serendipity
our epiphany; accidentally in love
The job I did get over him
and incidentally declined
to save my Captain from the
misconception that there is
‘Honor in Dying for your Country’

A love pariah I have become
so sing Mariah ‘In my life, there’s been heartache and pain..
I want to know what love is…’

as I ruminate over Henry.

I met Henry in 1994 when we lived segregated, he is white and I am classified as non white. We both were shortlisted for the same job, straight after school. The norm being for him to enlist in the army but he applied for a normal job, is how we met.