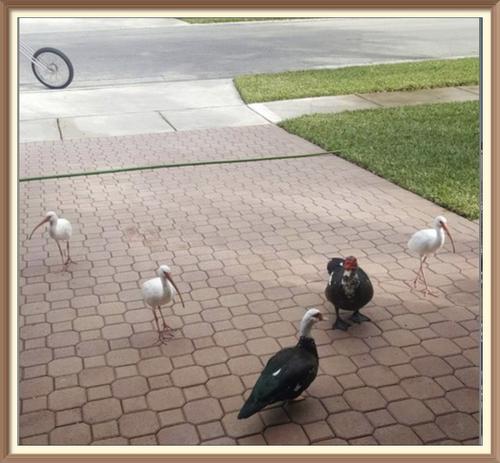 We walked to his house everyday.
Me and Dottie, my daughter.
He always sat with us
He fed us bread and water.

We had a nice place to rest,
We could sleep without a care.
Nice and cool in the garage.
He worked on something in there.

He made us eat from his hand.
We worked and earned to get fed.
Five of us came their steady.
Gladly, ate from his hand, the bread.

We felt safe in that room.
We couldn't believe our good luck.
He even gave us jobs
He called us his guard ducks.

A rat with a bushy tail came.
He fed it seeds from a cup.
He thought the squirrel was a friend.
But we knew something was up.

Learned the squirrel's name was Stu.
He called us Big, Nancy and Speedy.
Stu kept playing on the two wheeler.
He was conniving and also greedy.

We tried to warn him about Stu
Tried to tell him he wasn't cool.
He didn't listen and didn't want to.
The squirrel played him like a fool.

We saw him go into the house
Stu leapt from the tree and rode off.
The two wheeled thingy was gone.
He came out and called the cops.

We decided to get revenge
Just waiting for Stu to return
We would set him up for a fall
We would eat the seeds we earned.

We heard Stu was acquitted.
How is it possible this happened?
Innocent of all the charges.
Trumps at fault said the CNN caption.

We decided to mobilize.
Time to take him out for good..
We have formed a coalition army.
Time to boot Stu from the hood.

Stu and chopper dude talking.
Stu is playing him for a clown.
We heard he invited Stu to Georgia.
About to become a duck smack-down.

A view from the Ducks Side