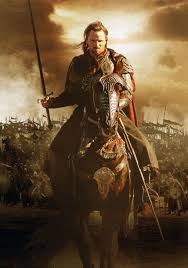 The Kings tunic was bright and flashy
He even made his maid look classy
His hair was short and shiny
Although his horse was very tiny
He always had a blush on his cheek
You would never have known his knees were weak
It was a rosy color, light and pink
Able to melt his love's hart with just a wink
All he did was play all day
At night he knew it was his time to pray
Solving all the problems that came his way
He loved to help, it made his day
His kingdom soon fell into war
His subjects found they needed him more and more
The dead of night filled with the swords loud clash
The bloody field lit with a torches flash
On his noble steed, the king took flight
Not away, but towards battlefields light
To give his life for the kingdom he loves
It was a dark night but he could see the angles doves
To know heaven was on his side
He grew stronger with every stride
On he rode to challenge the king of a far away land
Knowing this could be his last stand
On and on they fought, like a graceful dance
Although he was already struck with a lance
As he fell to await his last breath
Ready to shake hands with the darkness of death
A light appeared, bright and clear
Heavons song let loose for all to hear
An army of angles came marching his way
As the darkest night turned into the brightest day
He rose again, sword in hand
He had to fight to defend his land
His swing was wide, but the blade struck true
His enemy collapsed as his blade cut through
Tired and weary, he wanted to go home
But he had to fight or be forced to roam
To finish the fight others began
To defend his wife, his country, his land
He fought like a demon throughout the night
Only to be sated by pale mornings light
In honor of friends he watched die
He fell to his knees to mourn and cry
They fought hard,the battle won
Only to find he lost a son
He buried his son, tears in his eyes
Sad to say his last goodbyes
The King sailed home, his safe nation
And docked the ship among the celebrations
The king stayed in his room as the week's went by
He could hear the echo of his last goodbye
A lost son, noble and brave
Lost to sleep in his dark, dank grave
The king sat alone, his thoughts far away
Wishing his son could live another day
He soon realized his son gladly gave his life
It would not do to sit full of pain and strife
He Sat up straight and with a flick of his hand
He wend back to his job of ruling his land
Years went by, his land happy and bright
He ruled his land fair and right
At his feet he had a new son
The new Prince glowed like the morning Sun
The Prince liked to laugh, run, and play
But, like the king he knew when it was time to pray