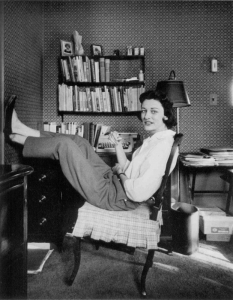 Poet, writer, literary critic and friend Maxine Kumin glorifies 20th century American poet Anne Sexton in the forward to Sexton’s The Complete Poems, writing, “no other American poet in our time has cried aloud publicly so many private details.”  If we fail to forego the often arbitrary nature of classification, we are bound to marvel at Sexton’s poetic work for its mastery of and contribution to the “confessional” mode; however, we must importantly commend Sexton’s intellectual brilliance, for her artistry comprises far more than a mere spilling of the guts.  Prior to her death in 1974, Sexton sent eight books to publication full of guileless revelations articulated in ingenuity that received mixed reviews and often times heavy criticism from predominantly male audiences. Yet, many readers, especially women, excitedly welcomed and identified with Sexton’s work and its strong female focus.  This is because in addition to impacting the practice and utilization of American poetry, Sexton’s work practically and theoretically functions to underscore female experience.   Her subject matter and imagery are not only complex, progressive and brave; they are also excitingly defiant against conventions of not only her craft but the overall social, physical and epistemic role of women in 20th century America and today.

Anne Sexton was born Anne Gray Harvey on November 9, 1928 in Newton, MA. She did not begin writing until age seventeen after she was sent to a preparatory school for girls, where her parents hoped she would be shaped into a proper woman. There, Sexton began writing poetry that ended up being published in the school yearbook; however, Anne soon discontinued writing after being accused of plagiarism by her own mother.

While attending the Garland School in Boston, Sexton met Alfred Muller Sexton (nicknamed Kayo) with whom she quickly eloped. After marrying Kayo, Anne took a course in modeling and briefly pursued modeling as a career. In 1953, Anne and Kayo welcomed their first daughter, Linda. Following the birth of her first daughter, Anne struggled with depression—increasingly so whenever her husband was away from home due to work—and eventually sought counseling in 1954. After the birth of the couple’s second daughter, Joyce (Joy), Sexton experienced her first suicide attempt and psychiatric hospitalization.  She did not resume writing poetry until December of 1956, under the guidance of her psychiatrist, Dr. Martin.  Anne quickly discovered therapeutic value in her writing and enrolled in John Holmes’ poetry workshop, where she met Maxine Kumin. In May of 1957, Sexton attempted suicide again.  However in August of the same year, she received a scholarship to Antioch Writers’ Conference, where she met W. D. Snodgrass.  In 1958, Anne enrolled in Robert Lowell’s graduate writing seminar at Boston University, where she met Sylvia Plath and George Starbuck.  Sexton’s talent as a poet and commitment to the craft of writing afforded her numerous opportunities to learn from, learn among, be mentored by and build friendships with influential poets. In this sense, she was incredibly lucky; however, those she learned from and worked with were just as fortunate to be in her presence. An important new voice in American poetry, Sexton’s career earned rapid success and maintained impressive momentum.  During her eighteen years as a writer, Sexton published eight books of poetry (leaving others in manuscript), and saw her play Mercy Street produced off-Broadway; she also earned most of the important awards available to American poets.

In spite of her incredible success as a writer and businesswoman, Sexton was consistently plagued by depression.  Over time, Sexton developed addictions to alcohol and sleeping pills, and on October 4, 1974, she carefully planned and executed her suicide. Biographer Diane Wood Middlebrook offers a poignant summary of Anne’s life in the preface to Anne Sexton: A Biography, writing: “What kind of woman was she? Spirited, good-looking: tall and lean as a fashion model; a suburban housewife who called herself Ms. Dog; a daughter, a mother; a New England WASP; like Emily Dickinson, ‘half-crack’d.’ And what kind of a poet? Intimate; confessional; comic; insistently, disruptively female.”  What Middlebrook omits from her apt description of this 20th-century American poet is the title of “feminist.” Likely, this is because Sexton did not self-identify as a feminist; however, Sexton’s womanhood is indivisible from her technique and product—her writing intentionally or unintentionally plays with the infusion of feminist sentiments.  “Sexton wrote about the social confusions of growing up in a female body and of living as a woman in postwar American society,” says Middlebrook.  Sexton makes the experience of being a woman central to her poetry; her writing is saturated in bodily references, images and metaphors. Poems like “When the Glass of My Body Broke,” “The Operation,” “In Celebration of My Uterus” and “Menstruation at Forty” are merely a few examples of poems within which Sexton targets and utilizes somatic reality in art.  Even when one may not consider bodily experience the main focus of whatever topic she is interrogating through her work, Sexton’s implementation of bodily references are accessible, if not explicit (e.g., “Ghosts,”  “The Break,” “The Doctor of the Heart”). Sexton’s ability to seamlessly synthesize the corporal and the psychic situation of human life makes her a master of her craft.

While Sexton faced plenty of criticism, especially regarding her later publications, her skill as a poet transcended the controversy over her subject matter.  As Erica Jong, in a review of Notebooks assessed, Sexton’s significance and artistry are often overlooked: “She is an important poet not only because of her courage in dealing with previously forbidden subjects, but because she can make the language sing. Of what does [her] artistry consist? Not just of her skill in writing traditional poems…. But by artistry, I mean something more subtle than the ability to write formal poems. I mean the artist’s sense of where her inspiration lies…. There are many poets of great talent who never take that talent anywhere…. They write poems which any number of people might have written. When Anne Sexton is at the top of her form, she writes a poem which no one else could have written.”

Category: Contemporary Poetry
This entry was posted on Sunday, July 1st, 2012 at 12:00 am. Both comments and pings are currently closed.