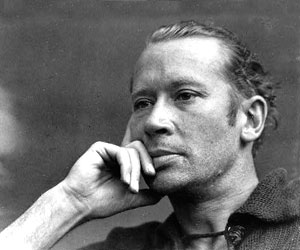 Whoever says you have to fit the mold to make it big need only become familiarized with the work and life of 20th century American poet, painter, essayist, author, and playwright, e. e. cummings to change his or her philosophy.  Edward Estlin Cummings (who later abbreviated and adapted the decapitalized version of his name) epitomized experimentation in his writings, radically reinventing the understanding of poetry by constructing completely avant-garde verse.  As divergent as his work is, it was and remains distinguished for its ingenuity, rather than dismissed as absurd.

Cummings was born at home in Cambridge, MA on October 14, 1894.  He began writing poems as early as ten years old, and his early work drew upon the imagist experiments of Amy Lowell.  After studying Latin and Greek at the Cambridge Latin High School, Cummings attended college at Harvard, where his studies exposed him to progressive modernist writers, such as Ezra Pound and Gertrude Stein.  He received his BA in 1915 and was awarded an MA the following year, both from Harvard.  In 1917, Cummings published an early selection of poems in the anthology Eight Harvard Poets before leaving the United States for France to serve as a volunteer ambulance driver in World War I; however, five months after his assignment, he and a friend found themselves interned in a prison camp by the French authorities on suspicion of espionage.  Cummings later recounted and embellished this experience in his novel, The Enormous Room.  After the war, Cummings spent time living in both rural Connecticut and Greenwich Village.  He also visited Paris quite frequently and travelled throughout Europe meeting poets and artists, including Pablo Picasso.  During his time in Europe, Cummings became increasingly mindful of Dada and surrealism; consequently, symbolism and allegory began enriching his work.

In 1920, The Dial published seven poems by Cummings, including his highly-celebrated and anthologized “Buffalo Bill’s.”  The publication of these innovative undertakings foreshadowed the cubist fusion with which Cummings was only beginning to experiment.  Cummings’ first collection of poems was entitled Tulips and Chimneys (1923).  While this collection contained more convention than Cummings is typically known for, Robert E. Maurer responded to Cummings’ debut in the Bucknell Review, saying “the book is so obviously the work of a talented young man who is striking off in new directions, groping for original and yet precise expression, experimenting in public…”

Thematically, Cummings’ poetry is characteristically preoccupied with nature and love.  In fact, with regard to the latter, most everyone is familiar with one of his most popular poems, “i carry your heart with me (i carry it in).”  Additionally, Cummings’ poetry consistently investigates the relationship of the individual to society and the world.  Cummings’ work is also recognized for his use of satire and colloquial language.  While his poetic forms and themes share an affinity with the romantic tradition, universally Cummings’ work shows a particular idiosyncrasy of syntax—or way of arranging individual words into larger phrases and sentences.  In fact, many of his most striking poems do not involve any typographical or punctuation innovations at all, but purely syntactic ones.

Later in his career, Cummings was criticized for becoming “comfortable” with his signature style, rather than continuing to innovate and evolve his poetry.  Nevertheless, he attained great popularity for the simplicity of his language, his playful mode and his attention to subjects such as sex and war.  During his lifetime, Cummings received numerous honors, including an Academy of American Poets Fellowship, two Guggenheim Fellowships, the Charles Eliot Norton Professorship at Harvard, the Bollingen Prize in Poetry in 1958, and a Ford Foundation grant.  At the time of his death on September 3, 1962, Cummings was the second most widely read poet in the United States, after Robert Frost.

As an expression, authentic art is never ordinary.  Like any and all art, poetry innately hungers for creativity and is ever-hindered by convention.  The celebration of Cummings’ extraordinary and unprecedented aesthetic shall be ever-abiding as a result of his rejection of established linguistic rules.  Indeed, the sensual and romantic poems of E. E. Cummings are as popular today and will be as popular for tomorrows to come as they were when he first wrote them in the first half of the 20th century because of the creativity of his craft.  So please, don’t be tied down by tradition in your writing, and never shy away from what stirs you!

Category: Contemporary Poetry
This entry was posted on Sunday, July 14th, 2013 at 12:00 am. Both comments and pings are currently closed.