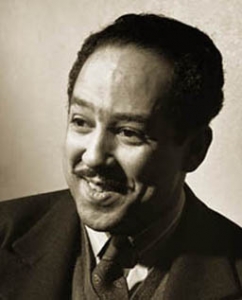 In 2001, the Academy of American Poets hosted a vote in National Poetry Month to pick a poet for immortalization on a postage stamp. Over 10,000 ballots were received for 205 different poets. Langston Hughes was the overwhelming victor and the US Postal Service issued his stamp in January of the following year.

Langston Hughes was a talented and hardworking writer, intellectual, and activist. Hughes came to New York City in the midst of the Harlem Renaissance and consorted with the movement’s major players including W. E. B. Du Bois, Countee Cullen, Zora Neale Hurston, and many others. To study his work and career not only expands our thinking of a prominent American author, but also informs us about a turbulent time in American literary history.

James Mercer Langston Hughes was born on February 1, 1902 in Joplin, Missouri. His parents separated shortly after his arrival; his childhood was spent in poverty, and he had a matriarchal, church-going upbringing. He learned to escape through books and language and was greatly influenced by Carl Sandburg and Walt Whitman.  He was active in high school writing for the school newspaper, editing the yearbook, and writing short stories, plays, and poems on his own. He frequently submitted poetry for publication, but was repeatedly rejected. In 1921, Hughes entered Columbia University and swiftly joined the ranks of the Harlem Renaissance movement, of which he’s regarded a prominent leader.

The end of the American Civil War saw an increase in job and educational opportunities available for African Americans; from this emerged the first black middle class in the US. These financially-abled Americans then expected the luxuries endowed to whites, but were undercut in 1896 by Plessy v. Ferguson and the resulting declaration that “separate but equal” was constitutional. Conditions in the South worsened economically and socially, and from 1910–1930 millions of African Americans went north seeking jobs and fair treatment in what is known as the Great Migration. Housing in Harlem was originally intended for commuting working-class whites, but adequate transportation trailed behind home development and real estate brokers and landlords were forced to sell and rent to blacks. The consequential exodus of whites from Harlem pushed blacks out of downtown and into Harlem, solidifying the image of the neighborhood.

Middle class blacks began actively advocating for racial equality and New York City became the locus of the effort. Artists, business owners, and scholars living in Harlem (and abroad) began crafting work that expressed black American culture in new, thought-provoking ways. They worked to develop patrons of black art and advance African American heritage through commissions and exhibitions. Artists and their supporters sought to educate, to validate black culture in America, and instill a sense of pride and acceptance.

In 1921, Hughes’s notable poem “The Negro Speaks of Rivers” was published in the NAACP magazine The Crisis, edited by Du Bois. After only a year, Hughes dropped out of Columbia University due to racial tension and worked odd jobs around the city, continuing to write and living in the creatively and intellectually prolific Harlem. He spent some time traveling and working abroad, staying temporarily in Paris before coming back to America. He gave up a respectable, but demanding, desk job for work as a busboy to make time for his writing. The position fortuitously put him in contact with Vachel Lindsay who recognized Hughes’s talent and was instrumental in the publishing of Hughes’s first book in 1926: The Weary Blues. The work, a book of jazz poetry, was written to be accompanied by music and performance at clubs in Harlem.

Hughes contributed significantly to the development of jazz poetry, which spawned in the ‘20s when many poets were rejecting literary traditions of the time. It’s distinguished by repeated phrases and rhythms that stress weak instead of strong beats, evocative of blues and jazz, and includes references to musicians, instruments, and clubs at the heart of the exploding scene in Harlem. The poetic form offered black writers a voice distinct from established white work and lived on through the Beat movement of the ‘50s and evolved into hip hop and poetry slams of modern day.

After publishing his first book, Hughes was awarded a scholarship that allowed him to attend Lincoln University in Pennsylvania and complete his bachelor’s degree in 1929. Hughes’ career was fruitful and he went on to write novels, plays, nonfiction, children’s stories, and of course poems. He won many awards, including the Springarn Medal and the Quill Award for poetry and received honorary doctorate degrees. His work was important at the time for uplifting and empowering black artists, but by the ‘60s his work’s perceived outdated feel repelled some young writers. He died on May 22, 1967 of complications from treatment of prostate cancer. His ashes “marked by a brass cosmogram” rest under the entrance to the Arthur Schomburg Center for Research in Black Culture, a division of the New York Public Library.

New poetic styles and ideas can come out of the most unexpected circumstances, proving once again that art and literature are always evolving. Langston Hughes and the Harlem Renaissance paved the way for a whole generation of artists, authors, and poets, modeling our need to explore and express our heritage and self-image and the necessity for experimentation and risk-taking in poetry.

Category: Classic Poetry
This entry was posted on Monday, April 7th, 2014 at 12:00 am. Both comments and pings are currently closed.