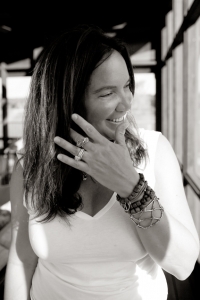 Previous Grand Prize winner Laura Leigh Packard grew up in Augusta, GA and has been writing since her childhood.  Likening the creative writing of her youth to temper tantrums, Laura explains, “When I was young, I would flee the house with my notebook, hide out in the backyard, and scribble everything I was feeling down.”  Even as a child, she understood the cathartic undertaking of composition; and her love and appreciation of writing’s ability to offer such relief, along with her distinguishable voice, has yet to subside; it is still “how [she] handle[s] most emotions, set-backs, hurt and uncertainties.”  The only thing that has changed, she notes, “is I wield not a notebook, but a smartphone and a PC.”

After attending Catholic high school, Laura set out for the University of Georgia.  Unsure of how to make a job out of her passion for writing, she eventually decided to focus her collegiate education on social work, rather than English or journalism.  Like many of the most memorable and successful authors, Laura’s “unconventional” degree (MRS) and occupation proved fruitful for her writing, as it exposed her to the kind of diversity, “of so many different people in so many different environments,” too often minimized in other career fields.  Stephen King found inspiration in his janitorial position at a high school; William S. Burroughs utilized his experience as an exterminator in his writing; and Laura underscores the particular impact working in hospice care had on her, saying: “Working….with death and dying, regrets and relationships, the scary but uplifting truths that hopefully will one day set us free—to let go—helped me as a writer more than anything else I could have done.”

Nowadays, Laura is a wife, mother and freelance writer on a local level for numerous publications.  She composes a humor column for The Coastal Illustrated, a bi-monthly publication of The Brunswick News in Georgia.  Additionally, she regularly contributes to The Southern Coterie (thesouthernc.com), “The social network of the South.”  Laura’s writing also enriches The Golden Isles and Elegant Island Living magazines; in fact, Elegant Island Living has awarded Laura Best Local Writer for the past two years.

Keeping true to her youthful cause for composition, Laura began penning her grand-prize winning poem “The Wedding Gown of Marriage” after a trivial, yet inspirational, fight with her husband of seventeen years; however, the attention of her verse became quickly consumed with the dissolution of her own parents’ union—a seemingly arbitrary outcome of forty-two years of marriage.  Laura confesses, “My idea of a family, the one I had come to know for my own forty years, was gone as I knew it.”

For better or for worse, anyone who has experienced divorce can attest to the existentially altering implications of such a decision.  In addition to challenging Laura’s perspective of family, love and marriage, her parents’ divorce displayed the always relentlessly raw and overwhelmingly inconvenient reality that nothing in life is safeguarded from change; not even our hearts’ affection can be concretized by the taking of “sacred vows.”  Regardless of this truth of uncertainty, partners participate in the ceremony of marriage and make assertions before family, friends and gods in good faith, because there exists a measurable instance in which we believe in the stability of our hearts.  Or, perhaps we never “believe,” but are merely seduced by such a beautiful notion that this part of ourselves—the heart, the part so many consider the whole—contradicts the unpredictable, uncontrollable, unreliable and unknowable nature of everything else in life.  In many ways, we need (or at least deeply want) to believe in the honest and unwavering essence of our hearts, our selves; not only is this what allows us to feel we truly know and love another, this idea also helps quell the otherwise maddening array of questions we may internally pose in a quest for our own self-understanding.

Therefore, when a situation such as divorce forces us to recognize all is not as it seems or as we would like to believe, that some things now appear “Artificially sweet,” we are confronted with more than a division of parts: the aftermath is a division of the self, a shattering of lives and an ideological monstrosity.   As Laura describes, “There was a lot of ugliness involved in ending something that was supposed to be forever.”  As her poem suggests, there was and may still remain confusion over when this “something,” this love that was supposed to be an eternal thing, revealed itself as something starkly opposing: “Had the essence of sweetness dissolved quickly with one caress / And at the first touch of the tongue?”  When? and Why? are questions Laura’s poem does not answer; rather, like any estimable piece of literature, “The Wedding Gown of Marriage” arouses these inquiries while accentuating and valuing the philosophical importance of asking over answering.

While Laura’s writing largely consists of essays, she exemplifies a poetic backbone and tongue—from the strength of her extended metaphor, affective imagery and feminine voice to her use of internal rhyme and laconic culmination—that parallels the celebrated verse of great American poetess’ such as Sylvia Plath and Anne Sexton.  Just like the works of these female forces, realism, emotion and authenticity “Seems all wrapped up in a neat and tiny” poem, not an essay, in Laura’s “The Wedding Gown of Marriage.”  Needless to say, reading contemporary poetry that packs this kind of punch is both rare and inexplicably exciting, and that is why it must be recognized.

On writing, Laura attests, “In the end, this is what I do—no matter what.  It’s part of me, a character trait: like my brown eyes, frizzy hair and abnormally small earlobes.”  Hopefully, poetry continues to be something Laura does—no matter what—as our ears, hearts and minds are greedy for more.

The Wedding Gown of Marriage

The quest for less baggage
Seems all wrapped up in a neat tiny
box, not a gift
Still nice, but tied up real tight.
Only does it hold up to the tulle and the tussle of cool, vacant sheets,
The layers and folds and creases that told of pain and misunderstanding.
Or bittersweet words that linger with time
Like layers of buttercream
Artificially sweet.
It came off at once,
This veil of complexity all sheer and white.
The iridescent taste of raw silk bunched up then spread stiff in a harsh morning light
Has the essence of sweetness dissolved quickly with one caress
And at the first touch of the tongue?
A garter, a martyr
A groom, a self starter
A bride made of blushing bravado
Complete with slick pearls
And polished silver reflected in mirrors
Of doubt.
Who knows what happens within each hand-stitched thread
When passion and bunting and (dis)honesty met.
A nod, a cold shoulder, a toss of the head,
Where things of the heart are often unsaid.
Who knew that chamber in which you were led
Would end without words but a stroke of a pen.
by Laura Lee Packard

Category: Member Recognition
This entry was posted on Sunday, April 14th, 2013 at 12:00 am. Both comments and pings are currently closed.