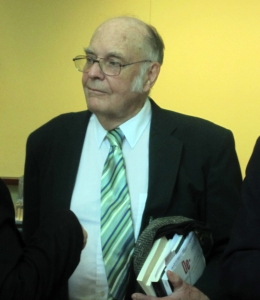 Among key speakers was X. J. Kennedy (pictured left)—acclaimed poet, author of children’s books, novelist, and college professor—with whose name every English major in America is familiar (he has been chief editor of Norton Anthologies as well as author of various textbooks for the past several decades).  As a friend, colleague, and great fan, Kennedy shared a brief, personal anecdote that drew a light chuckle from the audience inside the theater.  He was first drawn to De after reading Heart’s Needle, at which point he wrote De a “fan letter” praising his verse.  Upon receiving the letter and realizing they both currently lived in the same town, De drove to Kennedy’s “bachelor pad,” knocked on the door, and introduced himself to the man who would become a longtime friend and fan of his work.  Kennedy, who was in the process of preparing dinner, invited him in, but De politely declined, as him being served dinner by Kennedy wasn’t exactly his idea of fan appreciation.  Over the years, however, they shared many dinners together and their friendship continued to grow out of respect and admiration for one another.

While speaking of the famous, aberrant poetics of W. D. Snodgrass, Kennedy claims, “De was a great lover of bad poetry; he thought it could teach you something.”  And thanks to De, it has in fact taught many of us something.  One of the very best teaching tools available today was written by De (published by Graywolf Press) and is titled De/Compositions, in which De took a selection of classic and contemporary poems and “De-Composed” them—he rewrote them in a way that teaches students of poetry how not to write.   This, however, is just one of many contributions.  Kennedy refers to De as “one of the finest American poets of our time” and states that his influence on other poets was tremendous.  Once a student of Robert Lowell, one could say that De’s early work strongly imitated that of his mentor, who was at the forefront of the confessional movement; however, according to Kennedy, “Lowell ended up imitating him [Snodgrass].”

A former student of De’s and now an associate professor at UD, James Keegan recited “These Trees Stand,” a poem that clearly characterizes De, his sense of humor, and ultimately his early internal battle with self-acceptance, which he blazingly won.  With the notorious, metaphorical line “Snodgrass is walking through the universe” completing each stanza, the poem asserts De’s amusement with his own name and, ultimately, his life lot.  New Yorker essayist Adam Gopnik, also a key speaker at the event, later pointed out, it simply would not have had the same impact or conveyed the same meaning with any other name—such as Lowell, Bishop, or Browning.  This same amusement with his own shortcomings is wittily and thematically showcased throughout much of De’s work, and especially in one of his most well-liked poems, “April Inventory,” which was also recited and frequently referred to throughout the ceremony.

One thing all of De’s colleagues will agree upon is that he fully embraced who he was—he was his own poet.  He colored outside the lines and wrote about what he thought was important regardless of what may or may not have been deemed acceptable at any given time.  As Kennedy mentions, De was not afraid to take on controversial subjects, he was not afraid to express emotion, and his writing was not “mechanical.”  He wrote whatever suited him whether it be a series of dramatic monologues by some of the most evil, hated Nazis in Hitler’s regime (Fuehrer Bunker) or a collection of poems that completely expounds De’s love for nonsense (The Kinder Capers).   During a time when his thoughts were extensively occupied by his relationship with his daughter, he brought a revolutionary style of poetry to the table—confessional.  However, his name became closely associated with confessional poetry much to his chagrin, for it is a term he wholly detested, one with which he couldn’t disagree more.  “Confessional” connotes religious matter and De was not religious in any sense of the word.  More a propos to his manner of writing is what his wife Kathy knowingly called “uncommon tenderness.”  Either way, his Pulitzer Prize winning collection was deeply sentimental, and its confessional style had a profound impact on contemporary poets at the time.

De was a dear friend to us here at Poetry Nation, as is his wife Kathy, and it was truly an honor to attend this event.  A brilliant poet, a respected professor and colleague, a contemporary American satirist, and a man who made profound contributions to both the world of literary academia and amateur poetry, W. D. Snodgrass, his amazing gift for verse, and the legacy of his work will be with us for a long time to come.

Category: Contemporary Poetry
This entry was posted on Sunday, May 1st, 2011 at 12:00 am. Both comments and pings are currently closed.