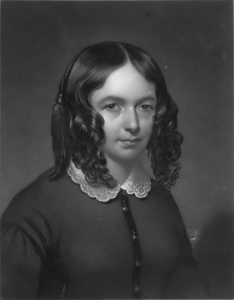 Elizabeth Barrett Browning was a Victorian poet whose work achieved popularity during her lifetime. The effect she had on literature is profound and far-reaching. Emily Dickinson kept a portrait of Browning in her bedroom. Virginia Woolf in an essay published in 1935 wrote “we may suspect that Elizabeth Barrett was inspired by a flash of true genius when she rushed into the drawing-room and said that here, where we live and work, is the true place for the poet.” Although not selected, she was widely considered worthy of succeeding William Wordsworth as Poet Laureate in England. Well-known for her poem “How do I love thee? Let me count the ways”—a female description of love—she mostly tackled much deeper social and political issues.

Browning was born March 6, 1806, in County Durham, England, to a wealthy family and the eldest of twelve children. Money from Jamaican sugar plantations supported Hope End Estate where Browning grew up in luxury with religion. Browning started writing poetry at age six and kept a diary. She was educated entirely at home, learning from her brothers’ tutors, and was well-read, consuming volumes of history, several Shakespearean works, and even parts of Paradise Lost before her tenth birthday.

A chronic lifelong affliction started at fifteen after she injured her spine in an accident with a horse and she was plagued till death with weakness and health problems, which inevitably led to dependence on laudanum and later morphine. In 1835, after financial trouble forced her father to sell their estate, her family moved to London. There, she met prominent figures of the time including William Wordsworth, Samuel Taylor Coleridge, and Alfred, Lord Tennyson.

An epic of rhyming couplets had been previously published at her father’s expense, but Browning’s first adult publication is The Seraphim and Other Poems which was well-received in 1838. Browning believed the highest form of art draws from and addresses day-to-day life and she devoted much of her work to issues of social injustice including slavery in America, the “question” of women, and child labor. In 1842, Browning published “The Cry of the Children” which depicts the horrific conditions endured by children working in coal mines, drawing significant attention to the issue.

Browning tells the story through children’s voices and a narrator’s outrage, but cart wheels are the central symbol of “The Cry of the Children.”  In lines 77–84, their plight is painted through the hypnotic churning of wheels which defines and distorts the world around the young workers. The sound of their cries are drowned out by the endless “droning” of cart wheels, and so no one hears their cries—or reacts to their cries—despite how closely by they pass.

The narrator tells the children to play in meadows, as children ought, but they ask her not to talk about “pleasures fair and fine,” which they will never have the opportunity to enjoy. The narrator entreats her “brothers” to tell the children to pray, but the children are dubious that God or His angels can hear them. They are hopeless—between them and sleep is the never-ending demand for coal until the ultimate salvation comes: death. “‘It is good when it happens,’ say the children, / ‘That we die before our time.’” If God might hear their prayers in a brief silence, He might gather them up to Him where they can finally rest. Browning closes the poem with a more direct message asking, “How long, O cruel nation, / Will you stand, to move the world, on a child’s heart?”

Poems, published in 1844, was another success for Browning. Shortly afterwards Robert Browning, a great admirer of Elizabeth’s work, began corresponding with her. The two met in 1845, and in the next year they secretly wed; Elizabeth’s father never endorsed the union and carried his estrangement to the grave. The new couple moved almost immediately to Florence where Elizabeth became passionate about Italian politics, writing prolifically on the subject. In 1849 at forty-three years old, Elizabeth gave birth to their only son.

In 1856, using a traditionally masculine form, Browning told a story of gender inequality in the epic narrative poem Aurora Leigh. In what was perceived a vulgar subject, Browning highlighted the social costs burdened to women including that of childbirth outside of marriage. It is in reaction to this poem that Virginia Woolf says Browning has been struck by genius.

Five years after publishing Aurora Leigh, Elizabeth Barrett Browning finally succumbed to lasting physical ailments and passed away in her Italian home at the age of fifty-five.

Category: Classic Poetry
This entry was posted on Thursday, July 17th, 2014 at 12:00 am. Both comments and pings are currently closed.