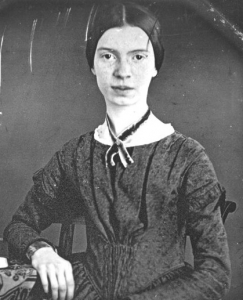 19th-century American Poet Emily Elizabeth Dickinson is remembered for her melancholic reclusiveness, active social life through correspondence, and avant-garde poetry. She was born on December 10, 1830, in Amherst, MA, to a family whose prominence had been secured by ancestors two hundred years earlier.

She was a well-behaved child and showed an artistic talent from an early age starting with music. She and her siblings were classically educated. In 1840, Dickinson entered Amherst Academy with her sister, Lavinia, and studied for seven years. Her education included literature—English and classical, Latin, botany, history, math, and other varied subjects. Dickinson was strongly influenced by the works of William Wordsworth, Ralph Waldo Emerson, Henry Wadsworth Longfellow, Charlotte Brontë, and William Shakespeare, among others. She enjoyed dedicating herself to schoolwork, although she was forced throughout her education to take time off for illnesses.

After completing her education at Amherst Academy, Dickinson attended Mount Holyoke Female Seminary for a brief ten months. Scholars are still divided on the reason for her departure; she may have been ill, her father may have requested her presence back at home, she may have been put off by the teachers or the school’s religious zeal, or she may have been homesick.

Back at the family “mansion,” Dickinson made home life her occupation, completing household tasks, baking, and staying involved with town activities. She was socially active, keeping up with distant acquaintances through letters. It was through correspondence that Dickinson shared her poetry with friends and family.

Her reclusive tendencies began in 1850 when she fell into a depression after the sudden death of Amherst Academy’s twenty-five-year-old principal. Death, the first pang of which she felt upon losing a close cousin, would forever haunt Dickinson and her writing. Her strongest friendship during this dark time was with her sister-in-law Susan Gilbert; the two exchanged hundreds of letters throughout their lives. Gilbert was a trusted mentor, editor, and supporter of Dickinson’s writing.

The first half of the 1860s, marked by isolation, is considered Dickinson’s most fruitful period of writing. From the mid-1850s until her death in 1882, Dickinson’s mother was bedridden, so Emily took on more household duties. As she withdrew further from outside life, she worked harder on poetry and the house’s garden—her pet projects.

Dickinson does not easily fit into any one literary school of thought, and she did not leave any statement of intentions regarding her style or aesthetic ideals. Some scholars assign her to the transcendental movement, but not all agree on the designation as her work lacks lofty morality typical of transcendentalism. Her work does exhibit unique punctuation, capitalization and lineation, and her fondest subjects— botanicals, death, spirituality, and her inner “world”—were starkly varied. Dickinson often used humor and puns and employed satire and irony, further demonstrating her compositions’ complexities.

Beginning in 1866, Dickinson’s productivity slowed as she endured more deaths and increased household burdens. The family lost their servant and a permanent replacement was not had until 1869. Dickinson’s eccentricities continued to develop, and before long she no longer greeted visitors face-to-face but conversed from the other side of the door. It’s reported that few locals saw Dickinson in person during the last fifteen years of her life. Despite her aloof behavior, she continued to socialize (through letters), write, and garden.

When Dickinson’s father died from a stroke in 1874, she did not attend the funeral held in the entrance of the family’s home; she remained in her room with the door cracked open. The following year, her mother also suffered a stroke which debilitated her health further, putting even more strain on the poet. Although she continued to write, she no longer edited and organized her poems as she had starting in 1858.

In the summer of 1884, recent deaths weighed heavily on Dickinson, and she felt an impending darkness. She fainted while baking, remaining unconscious for hours. Ill health continued for weeks. At one point she was confined to bed for a few months, though she still managed to send out letters in the spring of 1886. Then, after days of increasingly bad symptoms, Emily Dickinson died on May 15, 1886, at the age of fifty-five. She requested her coffin be carried through fields of buttercups.

Dickinson wrote close to 1,800 poems total, of which fewer than a dozen were published in her lifetime. What work was published received drastic editing beforehand to conform to rules of capitalization and punctuation. Her work was not seriously published until after her death, when her sister Lavinia found the neatly assembled manuscripts. Until then, the true scope of Emily’s body of work had been unknown.

Poems of Emily Dickinson, the first collection, was published in 1890 by personal acquaintances, though Dickinson’s poetry still received significant alteration. Not until 1955 was her voice allowed to stand on its own, intact, thanks to the respectful hand of literary scholar Thomas H. Johnson. He referred to Emily’s originals, rather than posthumous editions, in order to most accurately portray Dickinson’s work, arranging it chronologically in The Poems of Emily Dickinson.

Category: Classic Poetry
This entry was posted on Tuesday, July 7th, 2015 at 12:00 am. Both comments and pings are currently closed.