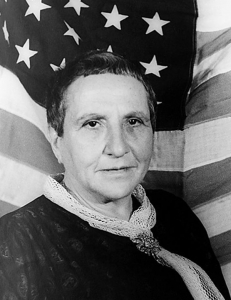 Stein was born on February 3, 1874, in modern-day Pittsburgh, PA, as the youngest of five children. Her parents, Daniel and Amelia Stein, were an upper-class family; her father was wealthy through business, real estate, and privately held mass transportation. When she was only a few years old, the family moved to Europe, settling in Paris, France, where Stein and her siblings received a cultured upbringing. After a few years, they returned to the US, this time to the West Coast in Oakland, CA. After her parents died, when she was a teenager, her oldest brother sent her and their sister to live with their mother’s family in Baltimore, MD.

James felt Stein was his “most brilliant woman student” and guided her to medical school. Stein enrolled, despite lacking interest in medical theory or practice, and left after two years at Johns Hopkins Medical School. Her writing during this time expresses the depression she felt in struggling to be included in a male-dominated field and rebuking a feminine mode. She did not dress in customary women’s clothing which evoked much commentary.

In 1903, Stein relocated to Paris, with her brother, Leo, where he hoped to develop a career in art. It is here, at 27 rue de Flerus, where the Stein salon started. These originally impromptu meetings, which included greats like Pablo Picasso, Ernest Hemingway, F. Scott Fitzgerald, Ezra Pound, and Henri Matisse, were discussions of literature and art that helped outline the modernist movement.

Modernism was an important movement in the early-to-mid-twentieth century that broke with traditional subjects and poetic forms to discover or create a new and contemporary means of personal expression. Poetic activity reached a peak in the US at the turn of the century as poets rejected European traditions in favor of developing a uniquely American aesthetic. As poet Walt Whitman said at the time, “America demands a poetry that is bold, modern and all-surrounding and kosmical, as she is herself.” New and radical social, political, and literary ideas transformed the landscape of American poetry. As part of the modernist movement, schools of writing like imagism, symbolism, objectivism, naturalism, realism, and surrealism flourished between 1900 and 1945.

In Paris, when literary and artistic minds congregated in her home, Gertrude Stein began writing in earnest. Three Lives, published in 1906, is Stein’s first published work of notable claim. She did not achieve commercial success, however, until 1932 with the publishing of her first best-seller, The Autobiography of Alice B. Toklas. It was, in fact, Stein’s own autobiography.

The critical response to Stein’s work remains split. Mabel Dodge Luhan, a friend of Stein’s, wrote: “every word lives and, apart from concept, it is so exquisitely rhythmical and cadenced that if we read it aloud and receive it as pure sound, it is like a kind of sensuous music .… Listening to Gertrude Stein’s words and forgetting to try to understand what they mean, one submits to their gradual charm.” Another supporter of Stein’s work said, “Here is one artist who has been able to accept ridicule, who has even forgone the privilege of writing the great American novel, uplifting our English speaking stage, and wearing the bays of the great poets to go live among the little housekeeping words, the swaggering bullying street-corner words, the honest working, money saving words and all the other forgotten and neglected citizens of the sacred and half forgotten city.”

Dissenters are clear with their distaste. F. W. Dupee describes her work as “gnomic, repetitive, illogical, sparsely punctuated… a scandal and a delight, lending itself equally to derisory parody and fierce denunciation.” Katherine Ann Porter, on Stein’s process, claims “wise or silly or nothing at all, down everything goes on the page with an air of everything being equal, unimportant in itself important because it happened to her and she was writing about it.”

Gertrude Stein died on July 27, 1946, from the same intestinal cancer that had claimed her mother’s life. Stein was seventy-two and living in Paris. A monument to Stein stands in Bryant Park, New York.

Category: Classic Poetry
This entry was posted on Wednesday, January 14th, 2015 at 12:00 am. Both comments and pings are currently closed.