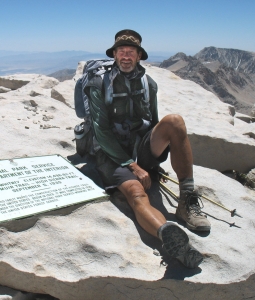 It is with springtime jubilation we announce Jeffrey Magnuson of San Diego, CA, is the grand prize winner of the July–December 2014 poetry contest!

Magnuson is a retired business owner of a wood products design and manufacturing company. His hobbies include attending auctions and estate sales offering quality vintage items to re-sell on eBay, exploring new wilderness destinations, and “wandering through the universe of the thoughtful word.” His winning poem, “The Stab of Maybe,” was created many years ago “out of loss and rejection from young and immature love, disheartened without commitment.” Magnuson says both he and the poem have evolved with time and experience, “hopefully for the better.”

“The Stab of Maybe” wowed judges with vivid imagery, thought-provoking metaphors, deft rhymes, and careful structure. Each of three stanzas is about a different subject. The first sets the scene, the second introduces the narrator’s lover, and the third closes with the speaker. Each stanza has an equal number of lines and follows the same pattern: the first line announces the stanza’s actual subject—even though the narrator says it is not—then the second line sets up the metaphorical subject. Take the poem’s beginning for instance: “This is no home / But a sterile operating room.” Of course it’s a home and not an operating room, but to the narrator, his relationship is full of painful anticipation. He continues by comparing his lover to “a volunteer for the needy” and himself to “a white gown showing crimson stains.” He describes his lover as a powerful person doling out charitable “capsules of benevolence” while he is powerless to make her love genuine. In the end, he is “punctured by the stab” of her indifference.

Eber & Wein Publishing also congratulates the talent of the twenty second place and one hundred third place winners. The turnout was strong and the judges had a tough job narrowing the thousands upon thousands of entries down to the final 121. The complete list of winners is available online at www.eberandwein.com.

Category: Member Recognition
This entry was posted on Wednesday, April 1st, 2015 at 12:00 am. Both comments and pings are currently closed.