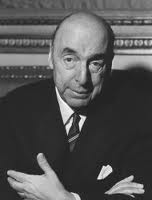 Regarding the Twentieth century Chilean poet Pablo Neruda, New York Times Book Review critic Selden Rodman remarks, “No writer of world renown is perhaps so little known to North Americans.”  While Neruda has been acclaimed by countless critics as the greatest poet writing in Spanish during his lifetime, troubles—including insufficiencies—with translation, as well as Neruda’s passionate political commitments to communism have complicated connections to his array of distinguished verse for poetry patrons in the United States.   However, American literary, television, film and cultural critic John Leonard pressingly professed in the New York Times, Neruda “was, I think, one of the great ones, a Whitman of the South.”  Undoubtedly, anyone who has had the privilege of reading Pablo Neruda’s work would likely agree it exquisitely and movingly attests to him as an archetype for the poetic embodiment of passion.  Truthfully, any reader who wants to be swept away by a poet who eloquently glorifies experience should explore the urgency of Neruda’s language, and any lover who wants to woo a beloved should take a lesson from the attention, love and care Neruda dedicates to all—from the animate and amorous to the inanimate and, for so many, indifferent.

Born in southern Chile on July 12, 1904, Ricardo Eliecer Neftalí Reyes Basoalto later chose the pen name Pablo Neruda after a Czech poet, Jan Neruda.  Pablo’s poetry gained him attention as early as his teenage years.  Over his lavishly linguistic lifetime, Neruda fashioned his poetry into historical epics, surrealist poems and sensually impassioned love poems.  Esteeming his art above all else, in 1923 Neruda sold all of his possessions to finance the publication of his first book, Crepusculario (Twilight), which he published under the pseudonym “Pablo Neruda” to avoid conflict with his family, who disapproved of his occupation.  The following year, he found a publisher for Veinte Poemas de Amor y una Canción Desesperada (Twenty Love Poems and a Song of Despair).  According to Robert Clemens, this volume “established him at the outset as a frank, sensuous spokesman for love.”  In fact, Neruda was the first Latin American poet to win popular acceptance for this kind of bold presentation.  Twenty Love Poems and a Song of Despair made a celebrity of Neruda, causing him to quit his studies in order to commit himself to his craft.

Melding his passion for poetry with how fervently he felt for the people of his country, in 1927 Neruda began his long career as a diplomat in the Latin American tradition of honoring poets with diplomatic assignments.  After serving as honorary consul in Burma, Neruda was named Chilean consul in Buenos Aires, Argentina, in 1933.  While in Argentina, Neruda became friends with the visiting Spanish poet Federico García Lorca.  Neruda transferred to Madrid later that year, where he met Spanish writer Manuel Altolaguirre; together, the two men founded a literary review, called Caballo Verde para la Poesîa (Green Horse for Poetry).  With the outbreak of the Spanish Civil War in 1936, Neruda’s poetic and political developments were interrupted.  He chronicled the horrendous war-torn years, which included the execution of García Lorca in España en el Corazón (Spain in the Heart), which was published from the war front.  During the Spanish Civil War, Neruda was candid about his sympathy for the loyalist cause.  He later returned to Europe to help settle republican refugees in the United States.

In 1938, Neruda returned to Chile, where he renewed his political activity and wrote prolifically.  He was named the Chilean Consul to Mexico in 1939, causing Neruda to venture away from Chile again for four years.  Upon returning to his homeland in 1943, Neruda was elected to the Senate and joined the Communist Party; however, when the Chilean government moved to the right, they declared communism illegal, cast Neruda out of the Senate, and caused him to go into hiding. While lying in wait, Neruda composed and published Canto General.

The Chilean government withdrew the order to arrest leftist writers and political figures in 1952, and Neruda returned to Chile where he married his third wife (his first two marriages both ended in divorce). For the next twenty-one years, Neruda continued a career that, equivalent to Walt Whitman’s, integrated private and public concerns.  Mirroring Whitman’s legacy as the poet of the people, Neruda became known as the people’s poet of Chile.  He also received numerous prestigious awards, including the International Peace Prize in 1950, the Lenin Peace Prize and the Stalin Peace Prize in 1953, and the Nobel Prize for Literature in 1971.  Tragically, Neruda’s diplomatic career and poetic production ended after he was diagnosed with cancer while serving a two-year term as ambassador to France.   And just twelve days after the defeat of Chile’s democratic regime, the man widely regarded as the greatest Latin-American poet since Darío, died of leukemia in Santiago, Chile on Septemper 23, 1973.

Pablo Neruda’s life was as exciting, imaginative and elevated as the poetry he composed.  Just as there is reason and exigency for anyone in America who values literature to acknowledge and appreciate the work of Walt Whitman, regardless of political association or mother tongue, any avid and honest reader and/or writer of poetry should recognize and receive the talent of Pablo Neruda.  Not only will you be absolutely enthralled by the beauty and impact of his verse , you will surely come to realize how easily, yet powerfully, art can transcend barriers we set up between ourselves in life—and how, in the end, the expression of experience deeply and truly felt is the universal language of us all.

Category: Contemporary Poetry
This entry was posted on Monday, April 1st, 2013 at 12:00 am. Both comments and pings are currently closed.