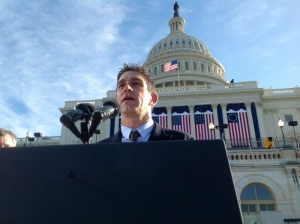 Five times in US history, poetry has been read at presidential swearing-in ceremonies.   Presidential-elect John F. Kennedy personally asked celebrated American poet Robert Frost to recite a poem at his 1961 presidential inauguration.  Frost agreed and read “The Gift Outright,” making him the first inaugural poet in the history of the event.  After being asked by Bill Clinton, Maya Angelou read her work, “On the Pulse of Morning,” for his 1993 inauguration.   In 1997, Clinton again asked a poet, fellow Arkansas native, Miller Williams, to read for the inauguration; Williams composed and read “Of History and Hope” for the occasion.  At the request of Barack Obama, poet Elizabeth Alexander presented an original work, “Praise Song for the Day,” for his 2009 inauguration.  Following Barack Obama’s re-election, poet Richard Blanco read “One Today,” a new poem he wrote for the 2013 inauguration.

All of these poems are beautiful works of art, but have also become political documents, speaking to specific moments of time in the U.S.  Robert Frost certainly reflected Kennedy’s background of New England pride and prominence.   By asking Maya Angelou to read, Bill Clinton started his presidency speaking to the power of diversity and inclusion in a true democracy.  The choice of Richard Blanco as an inaugural poet reflected Barack Obama’s emphasis on equality, unity, and gay rights in his inaugural address.

The newest in America’s inaugural history, Richard Blanco is also the first Latino, openly gay inaugural poet.  His poetic work, including “One Today,” is thematically preoccupied with issues of identity.  Regarding the United States as a country and reflecting on himself as an individual, Blanco recognizes, “We are a country of fierce individualism, which invites me to shape my life as I see fit.   As I reflect on this, I see how the American story is in many ways my story—a country still trying to negotiate its own identity, caught between the paradise of its founding ideals and the realities of its history, trying to figure it out, trying to ‘become’ even today —the word   ‘hope’ as fresh on our tongues as it ever was…. Regardless of my cultural, socioeconomic background and my sexuality, I have been given a place at the table, or more precisely, at the podium, because that is America.”

Category: Contemporary Poetry
This entry was posted on Monday, January 14th, 2013 at 12:00 am. Both comments and pings are currently closed.