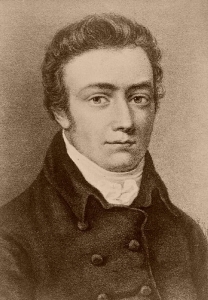 Samuel Taylor Coleridge was an English poet, critic, and philosopher and, with William Wordsworth, heralded the Romantic school of thought with the publishing of Lyrical Ballads in 1798.

Coleridge was born October 21, 1772, in Devonshire, England, the youngest of fourteen children. An ardent reader, Coleridge attended his father’s school until the patriarch’s sudden death in 1781 when Coleridge enrolled at Christ’s Hospital School in London. There, he met Charles Lamb, a lifelong friend and writer.

Coleridge entered Jesus College, Cambridge University, in 1791. He met fellow student Robert Southey in 1794 and the two became fast friends sharing ideas of philosophy sown by Plato’s Republic. Fueled by the turmoil surrounding the French Revolution, they concocted a communal society to be established on the banks of the Susquehanna River in Pennsylvania. It would center on family, work, discussion, and political and religious freedom. Coleridge left Cambridge to focus on the plan and to serve as a public lecturer.

After Southey married, and feeling the pressure to also conform to the values of their pantisocracy, Coleridge married Sarah Fricker, sister to Southey’s bride, in 1795. Not long after, Southey abandoned the commune project to pursue law, leaving Coleridge in an unhappy marriage. Coleridge spent much of his time apart from his family, and, with no other plan, began work as a writer. That same year, Coleridge met William Wordsworth who would have a significant influence on Coleridge’s work. The two pursued the nature of the human mind through philosophical discussion and writing.

The thought suggested itself (to which of us I do not recollect) that a series of poems might be composed of two sorts. In the one, the incidents and agents were to be, in part at least, supernatural; and the excellence aimed at was to consist in the interesting of the affections by the dramatic truth of such emotions as would naturally accompany such situations, supposing them real. And real in this sense they have been to every human being who, from whatever source of delusion, has at any time believed himself under supernatural agency. For the second class, subjects were to be chosen from ordinary life; the characters and incidents were to be such, as will be found in every village and its vicinity, where there is a meditative and feeling mind to seek after them, or to notice them, when they present themselves.

The book marks the start of the Romantic period where writers and artists revolted against the conventional strictness of neoclassicism and instead placed emphasis on imagination and emotions. Romantic poetry focuses on thought, feeling, and the creativity of the individual as opposed to hard science and cold logic. Coleridge and Wordsworth believed truth could be found from listening to one’s intuitions—especially from within the sphere of nature.

Coleridge secured an annuity from Josiah and Thomas Wedgwood in 1798 and used the financial independence to follow intellectual pursuits and travel, taking Wordsworth and Wordsworth’s sister to Germany. There, Coleridge learned German and attended lectures on physiology and biblical criticism.

On his return to England, Coleridge fell in love with Wordsworth’s future sister-in-law, Sara Hutchinson. He had hoped to balance platonic love for her with devotion to his own family but was unsuccessful, and he fell into a depressed state. He decided to accept a position as secretary in a warmer climate, but his health did not improve. When he returned again to England, he finally separated from his wife. Southey, feeling guilty about the bad advice he gave Coleridge in accepting the marriage, looked over Coleridge’s family for the rest of his life.

Sara Hutchinson served as assistant to Coleridge while he published The Friend, a periodical, from June 1809 to March 1810, but the strain of the relationship drove her away. Coleridge blamed Wordsworth for encouraging Sara, his sister-in-law, to leave and shortly thereafter ended his relationship with the poet. The loss of Wordsworth’s companionship was a crippling blow and was the darkest period of Coleridge’s life; his depression manifested in his writing and opium dependency.

Coleridge eventually found some solace in Christianity and for a short period experienced significant productivity, which included a lengthy criticism of Wordsworth’s work. In 1824, he was elected as a fellow of the Royal Society of Literature, which brought recognition and an annuity. Coleridge spent his remaining years writing, traveling, lecturing, and struggling with his opium addiction. He died on July 25, 1834, near London.

Category: Classic Poetry
This entry was posted on Tuesday, April 21st, 2015 at 12:00 am. Both comments and pings are currently closed.