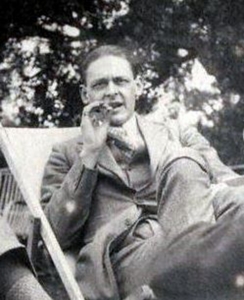 Thomas Stearns (T. S.) Eliot was born September 26, 1888, in St. Louis, Missouri. He was the youngest of seven children in a prosperous family; his siblings were already half-grown, his father was the president of the Hydraulic-Press Brick Company, and his mother was a social worker and amateur poet. His family was originally from New England but relocated when Eliot’s grandfather founded the Unitarian church in St. Louis. Every summer, they would return to visit the Northeast shore.

Eliot was born with a double hernia which barred him from participating in physical activities; literature was his playmate. Eliot started writing poetry when he was fourteen, but he destroyed his early work for being too depressing.

In his formal training, Eliot attended several academies and colleges. He completed his bachelor’s degree one year early, and he earned several degrees from Harvard. Eliot immigrated to England in 1914 (he was naturalized as a British citizen in 1927) to attend Merton College in Oxford. In London Eliot met Ezra Pound, an American, who introduced Eliot to prominent literary circles, contributing greatly to Eliot’s success. Eliot was a natural in social situations and spent much of his time in London with fellow Modernists.

Modernism was an important movement in the early-to-mid-twentieth century that broke with traditional subjects and poetic forms to discover or create a new and contemporary means of personal expression. New and radical social, political, and literary ideas transformed the landscape of poetry. As part of the Modernist movement, schools of writing like imagism, symbolism, objectivism, naturalism, realism, and surrealism flourished between 1900 and 1945.

In 1915, Pound was instrumental in getting “The Love Song of J. Alfred Prufrock,” which Eliot had begun in February of 1910, published in Poetry: A Magazine of Verse. The complex poem explores unconscious thought through stream of consciousness writing, a significant addition to literature by Modernism.

By some accounts, Eliot was in a hurry to marry. Unfortunately, his rash decision to join with Vivienne Haigh-Wood in June of 1915 brought increased tension to his relationship with his family across the Atlantic. Vivienne suffered from poor health, and the emotional and financial strain wore down the couple’s union. Scholars have suggested that, for Eliot, the marriage served to philosophically connect him to England. It was an unhappy marriage for both.

Eliot only studied for a year at Merton, working as a teacher afterwards and writing book reviews and lecturing in evenings to supplement his income. In 1917, he began working at a bank in a positon utilizing his knowledge of languages. The financial security freed Eliot up for writing and that year his first book, Prufrock and Other Observations, was published.

The deterioration of his marriage and the resulting anxiety led Eliot to write The Waste Land, perhaps his most influential work. Ezra Pound worked with Eliot to edit the draft into the final version published in 1922 by The Dial. Eliot spent less and less time with Vivienne who eventually, in 1938, was committed to the Northumberland House mental hospital. She stayed there until her death in January of 1947, and although the couple did not divorce, Eliot never visited Vivienne.

Eliot worked at the bank until 1925 when a new publishing company, the origin of Faber and Faber, brought him and his business acumen in. Eliot worked his way through the firm. In his off time, Eliot served as editor of the literary journal Criterion and continued in that role until impending war forced the periodical to close in 1939.

Eliot spent his later years writing plays and reviews and scouting new literary talent. In 1948, Eliot was awarded the Nobel Prize in Literature. In 1957, at sixty-eight, Eliot married thirty-year-old Esmé Valerie Fletcher. She had been his secretary at Faber and Faber since 1949. The wedding, held in early morning, was largely a secret.

In his London home on January 4, 1965, T. S. Eliot died at the age of seventy-six. He had long suffered from smoking-related issues including bronchitis and emphysema.

Category: Classic Poetry
This entry was posted on Tuesday, November 10th, 2015 at 12:00 am. Both comments and pings are currently closed.