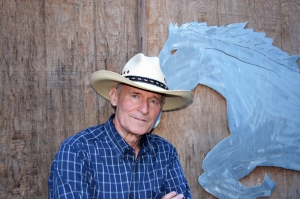 James Milliron of Yakima, WA became the newest addition to Eber & Wein’s winner’s circle in November of this year.  A 1975 graduate of Palmer College of Chiropractic, James has been a professional in his field for thirty-five years.  Outside of his practice, however, James proudly admits that much of his time is occupied with horses, dogs, cats, fish and, of course, family.  The Wenas Valley north of Yakima is where James and his wife Gina Marie Lucey call home.  They have four children—Frank James, Mary Beth, and daughters Zuley and Genny, whom James and Gina adopted from Mexico.  And although for two years (at a very young age) he thought he would be the only child to parents Bob and Kay, James ended up being the oldest of nine children.

With a long-time interest in equine sports, Milliron, a former jumper, is now a dressage rider.  Horses have always been an important aspect of his life and a key source of poetic inspiration.  Says Milliron,“The eye of a horse is like Don Juan DeMarco saying, ‘I see all of my unborn children in your eyes.’”
Although reading and writing has been a literary staple in Milliron’s life for the past thirty years, he still claims that he has “just begun.”  Whether journaling, writing for The Philosopher’s Quill (a small Chiropractic journal), reading, which James emphasizes “makes good writing,” or versifying, Milliron continues to indulge his passion for the written word in every way.  Such dedication to literary art has spawned a wonderful, artistic talent well-deserving of Grand Prize honors.  His winning poem “To Writers R. A. and Tom” was actually written twenty years ago in dedication to two of Milliron’s professors at Yakima Valley Community College, R. A. Larson and Tom Pier.  Evoking a nostalgic mood and rich with Catholic imagery, Milliron’s work pays homage to mentors who had a profound influence on his life and writing at the time. Strong descriptive language conveys a humble sense of awakening and gratitude.  The wine motif is a supportive book-end agent used in the opening as well as in the closing, where the poem ends with a mythical allusion to Dionysus, Greek god of the vine.
Milliron major influences are T. S. Eliot, Billy Collins, James Barnes, Ted Kooser, B. H. Fairchild, and Ernest Hemingway, whose work he specifically defines as “clean, terse . . . a sense of place identified.”  His first book of poetry, Entering Yakima County, will be released in 2011.

Category: Member Recognition
This entry was posted on Friday, December 10th, 2010 at 12:00 am. Both comments and pings are currently closed.