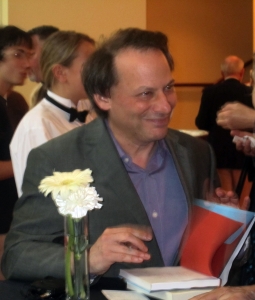 What an honor it was not only to attend an event held in honor of one of American’s most influential contemporary poets but to also be in the presence of Adam Gopnik, longtime New Yorker essayist, commentator, and author of children’s books.  Gopnik was invited by the University of Delaware to be a guest speaker/commentator at the Symposium in Memory of W. D. Snodgrass on April 27, 2011 at UD’s Roselle Center for the Arts.  Although Gopnik was never connected to Snodgrass on a personal level, he feels they share at least one common bond—they come from the “same fraternity” of authors with “funny-sounding names” whereby Gopnik revealed his partiality to Snodgrass’s poem “These Trees Stand” containing the memorable line “Snodgrass is walking through the universe.”  This poem was recited at the start of the event by James Keegan, once a student of Snodgrass and now a professor.  As Gopnik pointed out, it simply would not have had the same impact or conveyed the same meaning with any other name—such as Lowell, Bishop, or Browning.  With a name like Snodgrass or Gopnik, what more can one do but embrace it?

Gopnik began his remarks by indicating that there are poets "we love by heart, poets we learn by rule, and poets we know in pieces."  Snodgrass perhaps is hard to place for those who do not know him, as his work encompassed a multitude of styles, attitudes, subjects, and themes.  He certainly would have appreciated Gopnik’s comment regarding him being labeled a confessional poet, as this is a label with which Snodgrass thoroughly disagreed.  Instead, Gopnik refers to Snodgrass as a “master of intimate detail,” a comment that easily corroborates Kathy Snodgrass’ later remark that her husband’s poetry exudes “uncommon tenderness.”

Gopnik spoke extensively about the great band of American poets who arose toward the end of WWII, namely Robert Lowell, Randall Jarrell, Elizabeth Bishop, and Richard Wilbur.  Snodgrass became a part of this group and dwelled frequently on the “prisoner of war” both literally and figuratively in his poetry.  Of these poets, Gopnik comments, “They are poets who continue to matter not just in the narrow world of academia, but in the larger world of readers who read for love and read for pleasure, who we still read and care passionately about."

Gopnik is an eloquent, entertaining speaker, one whom W. D. Snodgrass would have liked and  approved.  As a “distant observer,” Gopnik shared a unique perspective with all who attended.

Category: Contemporary Poetry
This entry was posted on Monday, May 23rd, 2011 at 12:00 am. Both comments and pings are currently closed.